Tunica WSOPCE - A preview of sensory overload that will leave you unsatisfied.

I'm going to break down my coverage of the Tunica event into a few parts.  Mostly because a number of delightful tales from this event deserve their own spotlight.  I'd like to start out commending myself on my picks.  A little more than a week ago I made a post citing who I believed would run deep in this event. First on my list were Kai Landry and Bob Talbot.  Both Kai and Bob managed to cash in this field of 480.  Which gives me braggin' rights.  40% of my selections beat astronomical odds. I will now be opening up shop as a psychic. Consult me about your financial and romantic woes.  I have the goods. 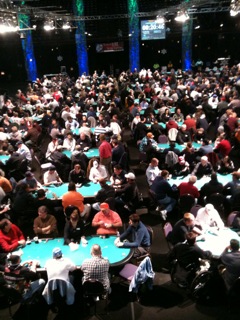 Whenever an event begins, in typical girl-fashion, I am entranced with the romance of so many familiar souls converging into one center in search of riches and fame.  I love the energy, the heartbreak and the laughter that entwine on those first few days when thousands of would-be champions crowd around hundred of tables.  I have a quirky habit of snapping pictures that would appear meaningless to most, but encapsulate a feeling I want to store away. This includes a snap shot of every event I attend at the beginning, and then once again after everyone shuffles home and the remnants have the feel of a post-war ghost town. I have never left an event without feeling a strong pang of sadness to see it all dissolve, as if it'd never occurred to begin with. The sort of emotion that leaves you wondering if it all really occurred, or was just an alcohol induced haze of psychedelic mish-mash. 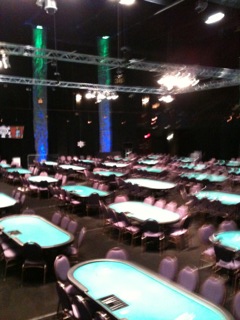 There is much to write, and I have nothing but time until the sun comes up (Thanks to a spontaneous 6 hour nap that happened shortly after I sat down to tie my shoe).  My body and mind are wrecked after the last two weeks, so I need a moment to package everything appropriately for you all.  I will however, hint at a few of the highlights to come. 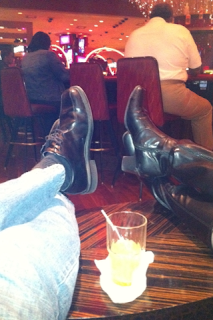 You will more than likely feel violated after the Tunica series is completed.  And not in the sort of way the Tunica Board of Tourism might hope. I personally feel like I could benefit from a week of counseling and a cruise to Cancun.  Alas, it is not to be.  Instead, we shall rejoice in communal blog-therapy before trouncing off to the next road-side carnival.

In a unique spin on a portion of these events, I Invite you to read the forthcoming updates from one Kai Landry.  Though the last few days were a joint effort, I am certain his perspective will lend a unique perspective.  Read Supplemental Income here.
Posted by Jennifer Gay at 11:51 PM