Cannibalism: Better than Online Poker & How to Play Pocket Jacks

This is not the first post I've written about my hatred for online poker.  It is not the last. Online poker makes my eyes bleed.  If I had to choose between donating my still-living body parts to starving cannibals in Uganda and playing another online tournament, even if the tournament buy in was free and the prize pool was one billion dollars, I might actually opt for the carnage in Africa.. simply because it would at least be interesting.  Online poker is not.


Tonight I found myself at a table with a bunch of people I've never seen before on Absolute. Because my user picture is my own, and clearly female, it didn't take long for someone to pipe in with the obligatory "if that really iz yur photoz, yur hawt!". If I had a dollar for every time I heard this in an online tournament, for once my online account would actually be growing in a positive direction.

It isn't even really that I'm hot.  Tolerable on a good day, I like to say.  Its that the men of the online poker world have sat fixated for so long, eyes bleeding, locked to their monitors watching miraculous river card after river card to constantly defy the odds, that their perception of reality is skewed.  I imagine my blonde hair and charming wit are like an oasis in the desert.  Only the desert is the digital felt of virtual hell.  I did coerce almost the entire group at one of my tables to add me on Facebook simply so that we could talk shit collectively about the joys of online poker.  Misery does love company you know. 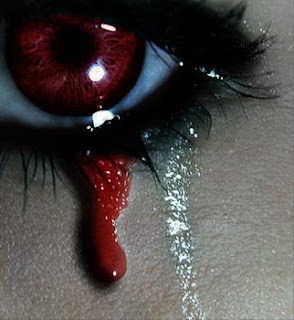 Tonight, as if to demonstrate what a masochist I am, I entered a half dozen tournaments ranging in buy in from $6 to $60.  I ran just deep enough in most of them, and cashed in slightly fewer, that by the end of the night I actually averaged just above what a teenage girl in a Taiwanese Sweat Shop would make in the same amount of time. And without the perks and self satisfaction that must come from crafting fine footwear for over privileged Americans to wear. ﻿

Before I wander off to find something more entertaining to do. (Sticking my arm in a vat of hot candle wax sounds like a good plan). I want to leave you with an inspirational video on a topic near and dear to all of our bleeding hearts.  How to play Pocket Jacks.  There are many theories surrounding how to play Pocket Jacks.  The most common of which seems to be an "All or Nothing" approach.  I don't love this philosophy, as they seem to rarely hold up.  Unless of course, someone has them all in against my Aces or Kings online.  Then they're the golden ticket!  I won't ruin this video by prefacing it with too much information.  But its pretty funny stuff.  Check it out and let me know what you think.﻿


I'm going to take my laptop into the bathroom, so I can both play online and drown myself simultaneously.  I like to mix things up from time to time.  Catch y'all later!

(I had to actually write this blog post twice.. the first time, I dropped my wireless mouse during the spell check and managed to kill the entire post.  Living through these emotions twice has done me in.  I'm pretty sure I suffer from PTSD now.  Please send me your Xanax. Thanks. )
Posted by Jennifer Gay at 11:21 PM