The main event for Harrah's Tunica WSOPCE begins exactly one week from today. I will be there, all three days.  Wearing my cool Bustout Gear, doing press coverage for Ante Up.  So come by and tell me anything but your horrific bad beat story and I'll see if I can't work it into my column.

There are a ton of great players coming in for this event, and I'm going to mention a few.. so when one of them takes it down I can say "Hey! Look! I predicted this! I am so awesome!".

Obviously, I don't have a crystal ball and I don't know everyone who is coming to town. I do know, amongst my friends, who definitely has the ability to run deep.  So we'll call this "Jen's List of Anticipated Cashes in the Main Event-Tunica".


We'll start with Kai Landry.  This kid is hot. And I'm not just talkin' about his Hollywood smile or his enticing frontal lobe. If you're playing against him, don't mistake his pensive expression for deep poker related thoughts.. he's more than likely thinking about how he's going to appropriately shit talk you in his next blog.  He'll be so funny about it though, that you won't mind. He's the master of backhanded compliments. He's a delight to watch at the table and he has made no secret about his plans to "Grover Cleveland" this event. Which I can only assume is a reference to his desire to take this sucker down in both 2009 and 2011 (As Cleveland did with his two non-sequential presidential elections), and not in fact a reference to some weird fetish that involves dying of mouth cancer. Check out Kai's blog for delightful posts after the fact.  (On a side note, Kai took home a flashy $183K with his first place win of this same event in 2009.  He only spent half of it on hookers.)

Next is Bob Talbot.  He had a rough run in Durant, but he's hell on wheels (literally) at the poker table.  He tore it up at the IP in Biloxi, and I have every confidence he'll find success this time around in Tunica. I don't think there are many people playing in this part of the country who don't know Bob, or haven't gone up against him yet at the table. Be afraid. Be very afraid. 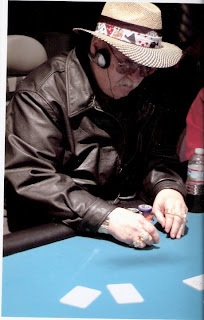 Al Theriac.  He's one of my favorites of my favorites.  He's on fire.  I interviewed Al for Ante Up Magazine last month after his win at the Magnolia Classic Main Event.  He told me then he's "Doing this for the old folks".  He's 72, he's a fantastic poker player, and I adore his wife. What started out as a story has now turned into a friendship and I have every confidence that he'll take home something for his efforts in Tunica. 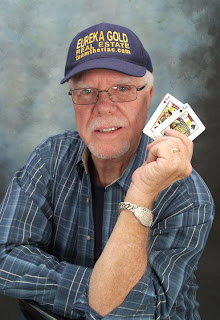 Mike Shafer.  Another really solid player who I have come to adore.  I met Mike the first time at Scotty's final table at the IP in Biloxi, and not only is this guy about 40% nuts.. you'd never peg him to be a serious card player. He's chatty, he's wired, he's all over the place.. and he's slowly takin' your chips while he's doing it. I wouldn't be the least bit surprised at another final table from this guy.  For the sake of odd trivia, he's also Uncle Kracker's brother. Seriously. And he calls Scotty "Creepy" or "The Creeper". Which cracks me up. 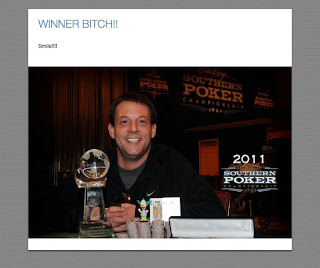 Scott Williams.  Oh shut up.  Like any of you didn't see THIS coming.  Of course, I saved my personal favorite.. and the best, for last. He's due for his big breakout cash.  He's one hell of a card player, the funniest person alive, and one of my best friends. I heart this guy. I have 100% faith in his ability to do great things and considering he only started playing the circuit events in August of '10 (Do you have any idea how much I had to BEG him to get him to come play?), he's off to a good start. If he manages a final table, I will be the absolutely spastic crazy girl with the camera on the rail. I may even make a glittery T-Shirt. As most of our mutual friends know, the day he takes down a WSOP ring.. I get partial custody of it. I NEED a shiny piece of jewelry. 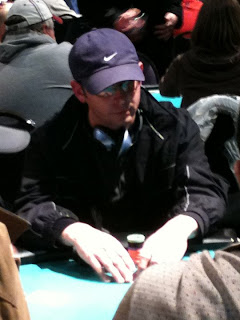 So these are my picks. I have a few wild card's I'd like to mention.  They aren't going to make the upper tier of my picks because I haven't spent enough time around any of them to really vouch first hand for their ability.. but something about them makes them worth mentioning.  Ross Bybee:  I met him at the IP in Biloxi, he's a genuinely nice guy and I expect him to run deep.  Aaron Johnson:  I've played against him a few times at Horseshoe.  He's become a friend, he's hysterically entertaining and if he lays off the captain and coke, he's a very very solid card player. And finally.. some odd little critter who looks to be about 21 years old and is nicknamed "Choctaw".  I'll be keeping an eye on him.
﻿
I know there are a lot of you I didn't mention. Some of you, I may not even know you plan on playing.  I hope I know all 9 of the last 9 standing and that the above mentioned are among them. If any of you manage to win it, I expect you to take me to dinner. I will attribute my positive luck vibes to your success.  If all of you manage to bust out in the first level, I will delete this blog post faster than you can say Jinx. ;)
Good luck!
<3,
Jen