Read/Repost Request: The heartbreaking & inspiring story of Ben Breedlove. A must see.

I was absolutely done for the night, shutting down the computer, cleaning up the kitchen.. and came to check my Facebook to make sure the last blog post posted.  A link to a video with the post "Do you believe in God?" caught my eye. The kid was kinda good-looking, in that shiny sort of way.. so I clicked the link.

(A followup to this post has been added, link at the bottom). 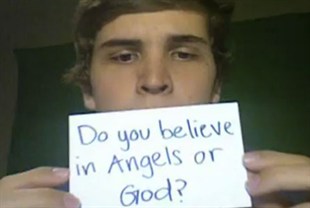 And here we are. I feel compelled to write about this, because it's such a heartbreaking - interesting - inspiring story.

The video is of Benjamin Breedlove. He's an 18 year old young man from Austin, TX who was born with some sort of awful heart condition (Hypertrophic Cardiomyapathy) .  He also has two YouTube channels, one called BreedloveTV and the other where he shares advice for teens on dating and similar topics.  Pretty popular stuff, with most of his videos having over 30,000 hits. Some much more. This video, the one I'm writing about, isn't part of his usual uploads.  He did this one privately under an unknown user name, and without fanfare. His own parents didn't even know he'd posted them until it was already too late.

In the video I saw, he talks about cheating death several times. It isn't an overtly religious message at all, just a teen talking about his experiences dodging death throughout the course of living with a heart defect.  He made the video just a few days ago, sharing in it an overwhelming peace with dying.  On Christmas day, 2011, he died of cardiac arrest when his pacemaker stopped functioning. Here is his video, posted just 6 days ago. In two parts.

In the little bit of searching for him online I did, I can see that he was an inspiration to thousands of people. Not with stories of being ill, but by just being a glowing, beautiful human being who LIVED. What really strikes me is the overwhelming difference between him in these videos and his normal YouTube posts.  There is a subtle peace about him in these two. He couldn't possibly have known, and yet, it's almost like he did in a way. His parents found these videos after he'd passed. What an amazing gift to leave behind.

Something about his smile is haunting me, and I felt compelled to sit down and share this with you all. If you share nothing else this year from my blog, or any other, repost this one. This video I think, should be shared.

Here is a great video of Ben answering questions about himself. Though they weren't shot too far apart, note the difference in his demeanor.


Rest in Peace, Ben Breedlove.  There is something fantastic about you. It's a pity you're gone, but a blessing your video remains behind to touch others. <3

Edited to Add: A Followup on this Blog Post HERE.