I love the fresh meat who wander into the card room every night.  The glowing, bright eyed kids who have finally watched enough WSOP re-runs on ESPN that they're certain they are the next Chris Moneymaker. They're ready.  They've got a couple crisp $100 bills, and as soon as we explain exactly what $1/$3 No-Limit means.. they're going to make their first million. 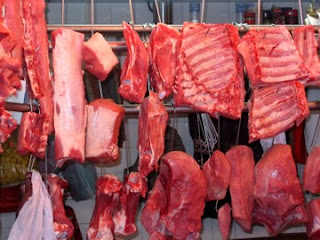 Sometimes, when I've had a long night, I find these kids annoying.  But I shouldn't.  Because they're the next familiar face.  The ones that stick around will be the next wave of players we'll all come to despise, adore, share cocktails with, chop prize pools with and share hotel rooms with.  We'll see them time and time again until we forget they're fresh meat.

"Fame" in poker is relative.  Scott and I were talking about this briefly, in some elevator or another going into some hotel or another for some event in some city.  For us, the "big" names are Phil Ivey, Doyle Brunson, Stu Ungar and Daniel Negreanu. Because those are the ones WE watched on TV and read about when we were getting our sea legs.  The pros we saw make millions while we were figuring out exactly which card was the river and which was the turn.

The guys you play alongside are never going to be those untouchable pros. Even when they reach that level.  We talked about how Dolan and Racener, Mizrachi and Cheong have played these same events we're playing. Some..at the same time.  How its entirely possible that Monkey or Kai, Al or Mike, Bob or Jeff.. anyone could be the next big bracelet winner.  The multi-million dollar champ.  But they won't be some untouchable Phil Ivey, even when they reach that level.. because they're our buddies. Even though it would be exactly the same in theory.. the deeper you commit to being part of the grind, the more you realize that it could be any one of us if we run right at the right time and keep coming back for more. The people who sit to your right and left, day in and day out.. the ones you take pictures with, not because they're celebrities but because they're your friend, could very well be the next person sponsored to the hilt with all the endorsement gigs.

I think THIS is what subconsciously keeps the poker community thriving.  Not so much the "Chris Moneymaker" one-in-a-million-shot fantasy.  Sure, that lures in the fresh meat. But what keeps them playing once they get a taste is the underlying reminder that this is very attainable. You play enough cards and see enough flops.. hit or miss.. and suddenly the pros stop being pros; but people you either like or dislike on a personal level.  And then one day, you're standing in a card room thumbing through whatever poker magazine is littering the table you're perched at and instead of seeing an all-star cast of success stories.. you're looking at pictures of your friends, or people you busted at the last event. Our tabloids become our high school yearbook.

And THIS, this is so much better than the bright eyed- bushy tailed perspective of walking into a convention center jam packed with poker players, ten million chips clanking in unison and seeing it all for the first time.  Walking into one of these events and it taking 15 minutes to cross a forty foot span to register because you're halted at every table to say "Hi" to a familiar face, or shake the hand of another player to congratulate them on recent success.

Poker.  It's like crack.  You give a prospective client a sample and hook em' for life.

I don't anticipate for a second that I'll ever win a WSOP bracelet. Or cash six figures. It isn't my role. I'm a writer, a supporter, a behind the scenes kinda gal.  I pick events I believe I can win and have a remarkable record for cashing.. but only because I know exactly what fields I can monopolize.  Unfortunately, these fields are limited to smaller scale, lower expectation groups of 200 or less. I'm the queen of the 7 pm nightlies. I'm okay with this. But on that same note, I see among some of my very dear friends.. exactly what it takes to go all the way.

And when they do, I will be so much happier about the success being their friend.. than I will have ever been if they were just another nameless icon on the cover of a magazine. And just like today's fresh meat will be tomorrow's familiar face, someday, you guys will be the legendary icons and untouchable pros for the newest clutch of incoming hatchlings.

Just know.. the very first time someone asks ANY of you for an autograph, I'm going to fall over laughing. And probably verbally abuse you for it.  For a long time. Oh, how this will delight me. <3

See you all soon,
Jen
Posted by Jennifer Gay at 3:38 AM