In just a few short days, everyone will be in Vegas. And I do mean, everyone.  Well, that is, except for me. I don't get to Vegas until the first week of July. I can't really justify taking off for a week after a month-long shut down thanks to the Tunica floods, and someone has to hold down the cotton fields.

Back in February, I did a blog post with my picks for the Tunica main event. Out of the 480 entrants, I picked five to cash. Of my five picks, two cashed. The three that didn't? One suffered a bad beat, one was sick and I have no idea what happened to the third he was out so fast. Even still, I was pretty happy with my choices and I stand by them.

So I'm going to try it again. This field is going to be tough.  Sure, there are a few one hit wonders in there, but for the most part.. this is the Superbowl for the circuit. The best of the grinders and tournament trail junkies.  These guys couldn't just plunk down $10,000 or satellite their way in, they had to EARN this.  Which makes a victory in this field more significant than a hearty dose of run-good in the main event.

If this were a horse race, these are the horses I would bet on. And speaking of betting on people, of the below people.. Scott Clark and Will Souther are both selling pieces of their action.  Matt Stout, who is not in the freeroll, is also selling some of his WSOP action. I'm more than likely going to buy pieces of all three of these guys. If you'd like to do the same, and can't figure out how to get in touch with them.. hit me up and I'll point you in the right direction. 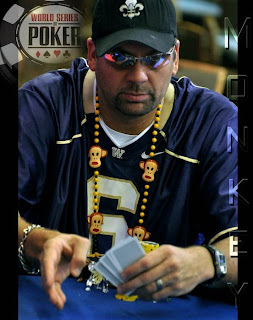 The fact that he's my friend hasn't clouded my judgement one bit on this one. Not only has he fought harder than anyone else to be at this event (on and off the tables), this is his field. I talked to Monk a bit today about his strategy and vibe for the freeroll and he's in a good place. He's earned this one, and there are more than a few of us who are rooting for him to take the whole thing down. Last fall was great for Monkey, and though 2011 has been off to a tumultuous start, between the freeroll and the main event.. I think the summer of 2011 will be the best yet for him. You can follow his success this summer through his well-read blog here. I don't want to jinx Monkey with too much positive talk, but you can count on the fact that I'll be glued to the poker news updates while this thing is going down.


Picking Kyle should prove that I'm not just picking buddies for my list. I'm not entirely sure how I feel about Kyle on a personal level. I chatted with him a bit the other night, and he came across as confident. Arrogant, maybe. A typical "Internet kid", phenom might be the word.. his is the sort of poker dream-story that journalist love.. "23 years old and only $2K to his name.. plays four events, wins 2 rings.." blah blah blah. Yeah, he's running hot.  Maybe he is a phenom. There is no doubt he has skills.  He's still so wet behind the ears in live play though, this summer will either make or break him.
He made a couple of comments during our chat that rubbed me the wrong way.. about not having time to talk to the reporters who have called him, and how he's been too busy to properly respond to offers from the press. Though when I reminded him that this industry is one where your name can be forgotten five minutes after you're on the radar, he softened a bit and seemed to genuinely listen. Maybe it was the placating "Yes ma'm" mentality of talking to someone who has been covering the tournament trail before he had a driver's license, or maybe he was actually paying attention. Either way, I tend to judge a man by the eye contact he makes and the way he carries himself. He didn't win my heart with his charm or presence, but his skills are something to pay attention to.  I have him second on my list to cash, and if he's successful I will be happy for him.
Bob Talbot and Captain Tom Franklin

There is a theory that poker is dominated by the young guns.  For the most part, I agree with this.. it's an exhausting lifestyle, keeping up with the game and the events.  I don't think this theory took into consideration though, the two Mississippi seniors, Talbot and Franklin.  I am proud to call Bob my friend. He's a constant source of humor, and his skill at the poker table is pretty solid.  He has been joking, around Facebook, that he hopes our mutual friends take 2nd. Implying that he plans on taking down the whole damn thing. And you know? He just might.
﻿﻿﻿﻿﻿﻿

Captain and I have been at many of the same events, but aside from a passing comment or two we aren't well acquainted. Though the friend in me would like to put an edge on odds for Bob, I wouldn't be surprised for either of these guys to outlast 90% of the field and make the money.  They have the patience, experience and relaxed outlook that some of the others will lack.

Two bloggers I read regularly.  Clark had a rough time in St. Louis, and has recently had to make the tough decision to join the rest of us ... and get a full time job. A solid cash in the freeroll would put him back in place to continue playing poker full time and keep the dream alive. I like the guy, I like reading his blog and it would make me happy to see him cash.  He's selling his action at a fantastic rate.. it's a good investment if you want to risk a little to get a piece of a potentially huge pie.
﻿﻿

Shorr is undeniably hot at the table, and he markets himself well.  You see his name everywhere.  Both of these guys are part of the Gulf Coast Poker family of bloggers, with myself and Monkey.. so a victory for any of the GCPers is a reason for me to celebrate. I didn't realize until this blog post, just how high Shorr's lifetime cash record is. Pretty impressive really. You can read Shorr's blog here.
My Two Wildcards:  Justin Kruger and Sam Barnhart
﻿
﻿

Sam Barnhart doesn't get nearly the respect he deserves, yet. I too was among the crowd that thought his Tunica win was break-through luck to a new live-circuit player.  And then I sat behind him when he took 4th in the Goldstrike Delta Gold main.  The guy is fearless. I'm not sure he has enough tournament experience to really kick appropriate ass at this event.. but he's earned his spot among them and I would be delighted if he cashed. There isn't a nicer guy in poker than Sam.
﻿﻿
﻿
﻿ ﻿﻿

Justin "Chocktawwwwwww" Kruger is batshit crazy.  I first met him in Tunica where he was trying to convince Teresa Sommerfeld that he didn't actually mean to eat her last Reese's Peanut Butter Cup, that it was a misunderstanding.  Then again when he shared a table with Scott Williams. He would randomly, while petting his alien doll, mumble incoherently and then violently yell "Choctawwwww" intermittently. Being a big fan of crazy people, I introduced myself. I watched him play a bit, and early on noted that he was one to watch. On whatever planet he hails from, they obviously take poker seriously. He's got skills. He's fun to watch. And he's just left-field enough that he might win the whole damn thing. My prediction is.. he's either going to be out super fast, or take the whole thing down. I'd like to see him cash top three.

On a side note, I don't know enough about Allie Prescott's play style to really count him as a pick or a wildcard. I became aware of him through Monk, while we were out drinking in Memphis one night, and the thought of having a Memphian smoke the freeroll is really appealing. Home team pride and all that. So I'll throw in a couple of extra good luck vibes for Mr. Prescott.  Who, by the way, just finished an impressive 4th in the New Orleans Regional Televised Circuit Championship. Way to go!
Good luck to everyone in Vegas. I will be hanging on every update.  Take it down, boys!
Posted by Jennifer Gay at 8:37 PM