The Goldstrike was an odd event all around.  The fields weren't great, the tournament room didn't have a good "feel" to it.. it just wasn't that much fun. I didn't play well, in the very few events I played and I didn't have any phenominal run of cards. Its the first poker event I remember actually electing to go home instead of hanging around for as many events as possible. I think its too close to Christmas to really be in the zone for poker. I did get a chance to connect with the lovely Al Theriac of Magnolia fame.. and his wife Delores. Ryan Potter was there of course, always with a slightly better hand than myself.  My friend Connie cashed in an event, and Stephen Garrett and I ended up at the same table (much to my dismay! He's a great guy, but he's better than me.. and I can't charm him into taking it easy on me, so I'd rather avoid him). A lot of the usual faces.  I've played enough at this point that between being at just about everyone's table at some point or another, and the magazine column.. there are very few people I don't recognize.  I like seeing the same people throughout the year and hearing about their successes and bad beats along the way.

In our usual fashion, the one event I played with Scotty.. we draw not only the same table, but side by side seats. We also had a dealer with a bad case of either Ebola, HIV or Smallpox. Maybe all of the above. But he was sick. And I anticipate that in approx. 12 days, we both will be too. I think he would have been cute too, if he wasn't an odd shade of green with fluid oozing from various orifaces. A pity. Spent some quality time with Joe from Horseshoe, who I adore. But really, aside from just being a week long social outing, the poker really didn't amount to much. I had small success in a cash game.. and on some random slot machine that had something to do with Goldfish. If I wake up in time, I'll catch the final event tomorrow at noon. Maybe.

Now, to my next point.  Some of the creepiest people I've ever met in my life hang out in poker rooms. Tonight is an excellent testament to that.

Its a running joke among my friends that I have a magnet for pulling the creepiest people out of their caves and drawing them into my personal space.  I'm like crack for crazy people. I also have a couple of dear friends who find this to be an attractive quality of mine, simply because they enjoy the entertainment value that comes out of it.  Usually at my expense.

Tonight started out normal enough.  I'm working my magic in the poker room.  My friend Scotty had his family up at the steakhouse for a birthday dinner, and I got to meet them. They were normal, charming people (actually, he should probably get a DNA test.. they were far more likeable than I would expect from any bloodline that could be responsible for his creation.  Maybe he's the black sheep..). It looked like the night would pass without incident.  And then it happened.  The crazy who set the standard for other crazies to live up to, wandered in.  He's one of those that lurk in the poker room, but appear to have never actually ever played poker in his life. With little to no provocation, he starts talking about this time that a brown recluse bit him and created a large sore on his backside, and he was thus inspired to call an escort service. (?!). So he does. And for whatever reason, he didn't use protection. And the hooker ended up pregnant with his daughter. And now, he is a vagabond, stalking this hooker across the United States so he can keep tabs on his kid. We eventually shake this guy, and by we I mean Jason, Jamie and Shawn. We link up with a coworker of mine, Tim and go have a cocktail in the bar.  There we meet "Pleather", or at least.. a man wearing pleather, who took great steps to eyeball stalk us for long periods of time. Even relocating himself for better vantage points. I was fortunate enough to capture a picture of Pleather creepin' on Jason. I have included it after this paragraph. The look on his face pretty much sums up the entire evening. Its pretty pro. Through a weird twist of fate, hooker-spider-guy and pleather meet and in the oddest display of "Getting to know you affection" actually start exchanging clothing. With each other. On the gaming floor. This delights me to no end. Jason is mildly intoxicated, and Jamie and Shawn are mildly horrified.  I'm not shocked at all, because really for me.. this makes perfect sense. After Scott and I fended off the prison guys straight out of Deliverance that night in Biloxi.. nothing surprises me anymore. We lose track of them for about an hour, and then, find them cozied up by the penny slots..no doubt sharing intimate sob stories involving hooker experiences gone bad. 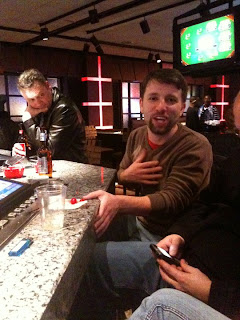 The above delightful image includes Jason Brady, who is defending his sweater selection to me, and has absolutely no idea that he's being eyeball stalked by the pleather wearing gentleman behind him.
The reason I bring all this up?  There are a lot of really creepy people who hang out in poker rooms.  And around poker rooms.  One this week from the Winter Classic at Goldstrike ranks up there with the Deliverance boys, Pleather and Spider-Hooker. His name is Manzi, and at the event before this one we met and he promptly proposed.  Okay, I like odd balls. I'm down.  But shortly thereafter he went to a level of crazy I can't really process. I spent the next four days dodging him, while final tabling and running game on a far less crazy kid from Nashville. Fast forward to the Goldstrike, and there he is. Lurking. Everywhere. In that "after he touches you, you want to take a shower" kinda way. I have a sinking feeling that I haven't seen the last of him either.

Some of the most important people in my life, I've met in card rooms.  Friends I'll have forever, and even a relationship or two that went that distance. But my advice to anyone in need of cheap entertainment?  Go find a poker room and sit around for a little while.  If you're even slightly approachable, someone a few crayons short of a full box will approach you and leave you bewildered.  Maybe a bit emotionally scarred. And definitely with a story that will be worth repeating time and time again.